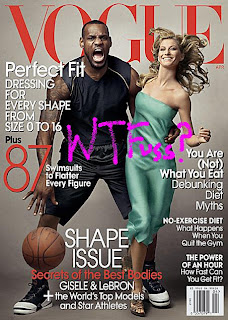 Sometimes the blogosphere can trigger some bull discussions on what is politically correct and what isn't and sadly since the 24-hours news stations are so desperate for content they decide to engage.

I was astonished to see how much news coverage the recent Vogue magazine cover featuring LeBron James and Gisele is getting.

Some ESPN black anchor described the cover as derogratory to black athletes and something about making these altheles look like "animals". WTFuss? Others have drawn comparisons to King Kong and Fray Wray - What?

I don't care what anyone thinks about the "Beauty and the Beast" esque shoot (Oooooh...I think I'm going to stir up some controversy), did anyone actually look at what the theme for the month's issue was?

This desperate need to draw correlations to the race issue will continue to ruin America yet they all claim to be ready for CHANGE. What-f*****-ever!
Posted by Adeoye Omotayo 3 comments: