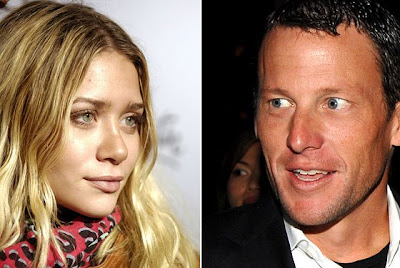 Okay, so this isn't Perez or Bossip, we don't have photographers waiting outside restaurants waiting for a snappy moment. We are a respectable trash blog. Yep, I said it....respectable!

Isn't this the weirdest pairing in a while. Lance Armstrong clearly done with the over-40s after Sheryl (white trouser-suit) Crow, that he has decided to swap saliva with the very-bohemian barely-legal Ashley Olsen.

Help me out here people!
Posted by Adeoye Omotayo 2 comments:

A NEW CRACKHEAD IN TOWN!

Once upon a time, there was a little untouchable brat called Martina Hingis. She was only 15 when she won her first grand slam and she went on to dominate the world of female tennis for years to come until The Williams Sisters arrived on the scene.

Like any good brat, she struggled to beat the sisters at the power game and decide (like any good bart would) to quit the game and move to a farm in her hometown of Basel, Switzerland where it is rumoured she milked cows on a daily basis..... for fun!

When the cheques stopped coming, she had a brain wave to go back into competitive professional tennis. Not that people gave a shit, she struggled to win a whopping total of 3 tournaments (not grandslams) till date.

So, Martina decide to quit professional tennis yesterday amid suspicion for cocaine consumption (wait for it...............) at the All-England Club during the rainy summer. Ooooh, and she reiterates that she isn't dodging doping tests.

The world is real, deal with it!
Posted by Adeoye Omotayo 4 comments: