The Dark Knight has become the second movie in Hollywood history to top $500 million at the domestic box office. The summer blockbuster has raised its total to $502.4 million, according to estimates from distributor Warner Bros.

Sadly, Titanic (the eternal drivel) remains the highest grossing movie of all time with $600.8 million. Speculators do not expect The Dark Knight to overtake its rival but wouldn't we love to end James Cameron's run.

Surely we are not the only ones whom feel this way.
Posted by Adeoye Omotayo No comments:

At Renaissance Man, we love us a good 'ole girl group.

We are huge fans of Girls Aloud and after been religious viewerS of Making the Band 4, we have been trying soooooooooooooooo hard to like Danity Kane.

The truth - we just don't understand why these girls have half-decent songs but when it comes to visuals - they just look WRONG.

To further support our argument, their new video for single 'Bad Girl' just looks like a tranny-fest.

Their entire make-up, hair, styling and chereographing team need re-shuffling. These girls just look Cheap. How hard can it be to make 5 average looking girls look half- decent, after all The Spice Girls managed it. Surely, anyone can do this.

FOOL OF THE DAY: DIDDY

We all know that no political campaign will be complete without the two cents of Sean 'Diddy' Combs.

We saw his very 'successful' and 'influential' hand during the Kerry 2004 campaign with his business savvy 'Vote or Die' initiative. Plus in recent months we have been bombarded with his stupid antics supposedly designed to demonstrate his support for the Democratic candidate.

But when will he and all other celebrities realise that sometimes their outspokeness could be a hindrance to a political campaign. Haven't they learned from how Oprah and George Clooney have both strategically pulled away slowly from Obama's campaign. Do what you can under-the-radar (fundraising, etc) but keep your face out of the Camera!

But will Diddy take this advice.....hell no!

On his blog post No. 16., he lunches into McCain's newly appointed running mate, Sarah Palin. In his bizzare rant, Diddy plays out his lack of political knowledge, wore his ignorance, asks if there are "any black people or crackheads in Alaska", and repeatedly accuse Senator John McCain of "bugging!"

Yeah Puff, we really need political advice form your royal highness. Why don't you just stick to dancing in your Sean John suits and let Barack do his thing. 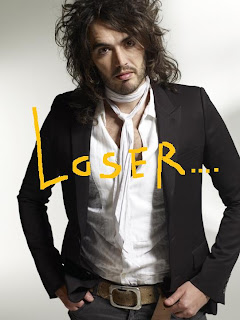 London's mediocre and all round Shag Boy, Russell Brand will be presenting next week's MTV Video Music Awards in the States.

Who signed that deal? When will MTV understand that trying to use half-baked comedians such as Jimmy Fallon, Sarah Silverman and the other washable past host to give the evening's proceedings a "unique edge" is just not working.

Chris Rock has been the only credible host. Just sign his huge check and bring his behind back.
Posted by Adeoye Omotayo 1 comment: