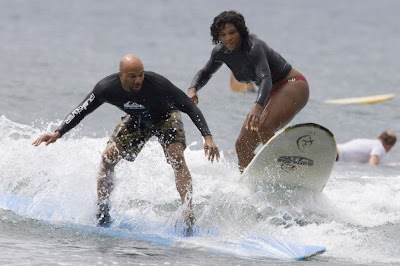 We've been saying Common and Serena Williams are an item for yonks now. Here they are holidaying in Hawaii.

Pairings don't get more interesting than this, I tell ya!
Posted by Adeoye Omotayo No comments:

Yep......I'm about to utter my favourite line whenever something exciting jumps out of the machine that is the American Music Industry.

"Here's possibly one of the most exciting young talents..." since Alicia Keys jumped out with 'Fallin' many many years ago.

Karina is the 16-year old Brooklyn native who has been generating a lot of attention amongst her peers with her honest approach to song-writing and her infinite capacity to paint vivid pictures of life as a teenager in East Coast, America.

Her debut single really hit a home run with us a few nights ago. The message of the anthemic '16 @ War' is so vivid and hard-hitting that you almost feel like a teenager again - susceptible to all its pressures and uncertainties.

It's a refreshing change from the usual record company teenager artist formula of songs about love and 'boys', it's no surprise chat rooms across the web are raging with teenagers donning '16 @ War' the soundtrack to their young lives.

This is very encouraging indeed.

Since when did you qualify to host a prestigious award off-the-back of a single?

When will the world stop falling for this drivel called A & R ploy used to create half-talented artists with gimmicks which are to be brutally honest, crap.

If a male artist, say imaginary 'Kurt Perry' released a single titled 'I kissed a boy and I liked it' and can bet our last dollar that song will not get a single radio airplay except on Gay radio stations that is.

We need to stop this double-standard bollocks which we so readily adapt as it suits us.
Posted by Adeoye Omotayo No comments: