WHO IS JESSE MCCARTNEY?

If you've read this blog before, you'd realise that I blame Justin Timberlake for everything. It's not like I dislike the dude or anything - I genuinely think he put out the best male Solo R&B album of 2007 but I just think he is responsible for a lot of pop-turn to R&B diluted music. Too many kids want to be Justin and do his dance move and sleep with Britney (oh my bad! Cameron)...He's just a record company template and that pisses me off.

Anyway, he's got a new single called Leavin' and my word could this sound anymore or look anymore similar to NSYNC's breakout single, Gone. 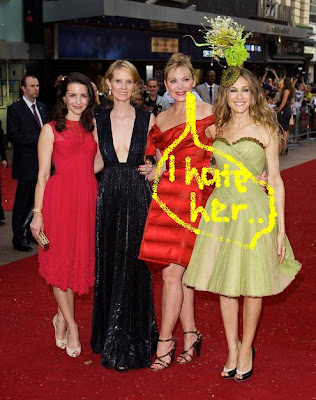 Even though we all know that the film will be 90-minutes of pure glam drivel: men, women, dog, horse are all equally excited to see the new Sex and the City feature movie. Feedback from critics-land suggest that the plot is so basic that it's almost mind-boggling but yet, they have all said; it's a must-see.

At the London premiere, the "fab-four" looked good but slightly sombre except Carrie Bradshaw of course. looking at this picture, it is clear that this is pure PR-God; the positioning of Sarah Jessica Parker next to Kim Cattrall. The look on Kim's face is reads get that b**** away from me!

Plus, what I really want to know is, how come Sarah Jessica Parker gets to wear a hat. What's up with that?
Posted by Adeoye Omotayo No comments: