ALESHA: NOT CALLING THE SHOTS 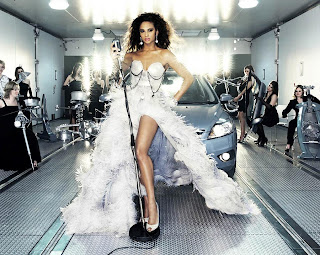 Do you ever think there are some 'stars' who are good at being jack-of-all-trades , and by that I mean - being a bonafide celebrity, glossy pages regular, etc.

Would you agree if we place Alesha Dixon in that box. I mean, we were all loving her towards the end of last year as she was crowned winner of BBC's Strictly Come Dancing, gracefully silencing her enemies especially husband snatcher Javine.

Now......we have mentally tried to block her only hit 'Lipstick' from the face of the planet but she seems to be persistent. She has a new song titled 'The Boy does nothing' which sounds more like a re-make of Mambo No.5 by that fella with the moustache.

If the truth be told, this is awful. Is she's seriously trying to convince us that she has 100% creative input in this offering. We would choke with laughter. We believe in evolving but really - this is a longgggggggggggggg way from the Mis-Teeq ladies days. Even, Mis-teeq's half-boiled R&B tunes are masterpieces in comparison to this drivel.

C'mon Alesha, your credibility is seriously on the line.
Posted by Adeoye Omotayo No comments: