I think this deserves a press conference or official statement of some sort.
Posted by Adeoye Omotayo No comments: 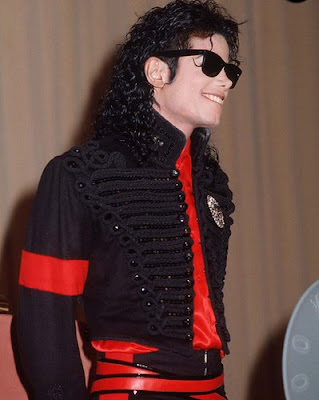 I remember watching BBC’s Panorama special ‘Living with Michael Jackson’ with Martin Bashir back in March 2005 at the height of his legal battles and wondering ‘has this man ever known peace?’

The argument of whether the world is responsible for Michael’s woes will continue to surface but honestly, perhaps it is time to go.

Time to go rest......this soul has given everything he has to be adored and praised. He has spent the last 10 years trying to make a comeback and I believe it is the stress of trying to ‘entertain’ again at the scheduled July dates that led to what can only be described as a sad exit.

Last year, during an idle conversation with my sister, I asked what would happen if Michael Jackson died? Her response was ‘I don’t want to think about it’, this perfectly captures what is going through my mind even now that it has happened. As I become more and more disorientated by the second since I got the text message at 11pm last night, I’m slightly comforted by the idea that finally he has peace - no more ridicule, no more attacks, no more repression, no more inner turmoil, no more pursuit for perfection (both in and out)

What a year..........2009 has seen a black man occupy arguably the most senior office in the world and lost the greatest music ambassador (who just happens to be black also) - all within 6 months. This certainly is a year history will not forget.

There will be no Friday track today. This is a mark of respect to the Michael Jackson catalogue. I have all of his albums except Dangerous and I have spent the last 2 hours trying to find THE song – it quickly dawned on me that this was impossible simply because every single MJ track is a gem (yes....even Blood on the Dance floor) – all are worthy to be the Friday track.

I trust you wonderful people will all understand and agree.

“I'm gonna make a change for once in my life, it's gonna feel real good, gonna make a difference, gonna make it right . . . I'm starting with the man in the mirror, I’m asking him to change his ways, and no message could have been any clearer if you wanna make the world a better place, take a look at yourself, and then make a change” extracts from Man in the Mirror