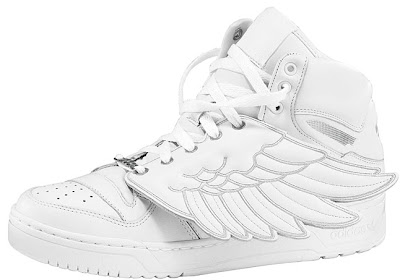 No IFs, BUTs or MAYBE.

You need a pair of Jeremy Scott designed Adidas Wing Sneakers in your life.

There are available this month @ www.adidas.com plus will set you back $180 - but who's counting.
Posted by Adeoye Omotayo 23 comments:

FEDERER ON THE PATH TO LEAD AGAIN

Swiss tennis great Roger Federer has hired Darren Cahill as his new coach
Cahill. The Aussie will start his partnership with the tennis ace at the Indian Wells this week according to the Australian.

Cahill and Federer, have been quietly working together in Dubai, where the Swiss star has a home. Federer's agent Tony Godsick confirmed Cahill will guide Federer initially in his comeback but would not say how long the two would work together.

The last time fans like ourselves saw our great hero was after his defeat at the Australian Open final in January.

We cannot wait for a triumphant return.
Posted by Adeoye Omotayo No comments: